Home Drones Drone Flight Laws from Around the World, Visualized 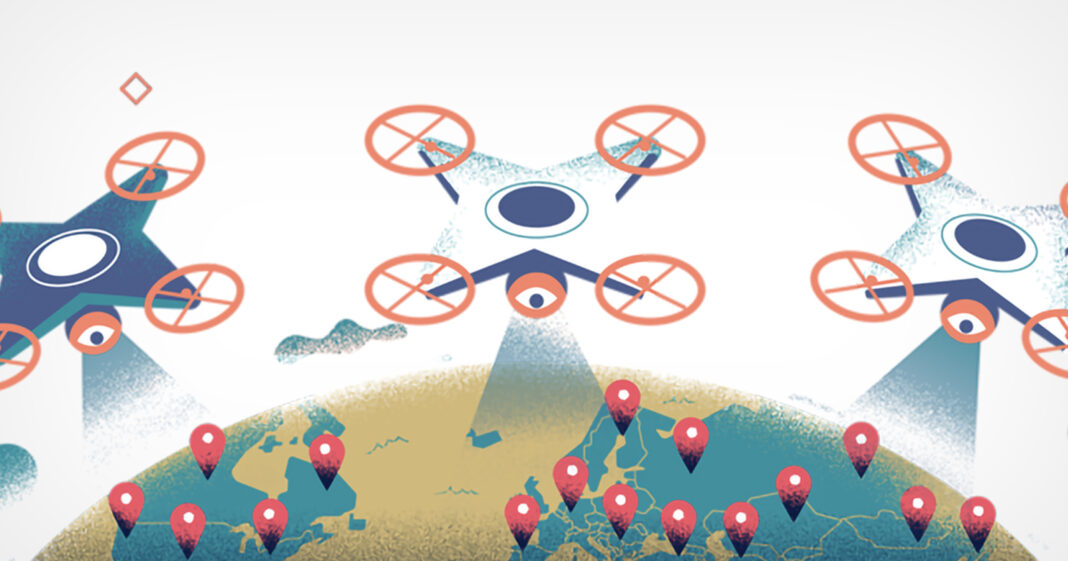 Flying a drone has become increasingly convoluted over the years, with the number and diversity of regulations growing to incredibly complicated levels. Surfshark has compiled data from countries around the world and produced these stellar visuals to help show where it’s still legal to take to the sky.

Surfshark is a VPN service that, for some reason, decided to do some of the most comprehensive research of drone flight laws around the globe out there. The company compiled data on drone-related legislation for 210 countries to see how they are being regulated using sources such as UAV Coach, RAND Corporation, UAV Systems International, and the Library of Congress.

The company found that it could categorize the regulations of each country into one of seven categories:

Outright ban Effective ban Restrictions Apply (such as drone registration or licensing, additional observers required, no commercial usage etc..) Visual line of sight required Experimental visual line of sight (experiments, where drones fly beyond the line of sight, are allowed) Unrestricted (when flying away from private property and airports, under 500 ft/150metres height and with drones weighing less than 250g) No drone-related legislation

You can view Surfshark’s impressive amount of raw data used in this report here.

The infographics show each country assigned a status based on its legislation as of October of 2020. Below is the full world map view, and below that are continents examined in greater detail. According to Surfshark’s data, Europe has one of the most liberal drone regulations of any content. “Although many of the countries in the continent have some form of drone legislation restricting drone usage, these are often in the form of simple operational guidelines,” Surfshark reports. North America has some of the more lax rules when it comes to line of sight. “While the bulk of countries around the world require drone pilots to be able to see the UAV at all times, 33% of countries in North America allow for experimental drone flights beyond the line of sight,” Surfshark finds. “The largest share of any continent and far above the 22% global average.”

Surfshark reasons that this is likely due to many tech companies researching ways to use drones as part of delivery infrastructure. No countries in South America have outright banned the flight of drones, though a majority of them have laws that state the drone must remain in line of sight. Some countries also have specific rules in place that are geared towards safety and environmental conservation. For example, drones are banned on the Galapagos Islands except in pre-approved scientific use cases. Surfshark found that 21% of countries in this region have outright banned drones, which is an 11% global share and the second-largest share of any continent.

“A small number of countries, however, are beginning to allow for drone flights beyond the line of sight,” the company reports. Rest of Asia and Oceania

A majority of countries in Oceania have no drone-related legislation. Of those that do, a majority allow drones as long as they stay within line of sight. No countries in this region have outright banned drones. More than half of all countries in this region have no drone-related legislation at all. Of those that do, however, 21% have outright banned their use which is the largest share of any continent.

“Another 13% of countries have an effective ban on the technology, the second largest share of any continent,” Surfshark reports. “In Egypt, for example, while drones are technically legal with permission from the Civil Aviation Authority, it is very difficult to obtain permission.”

There are signs of innovation on the continent, however. While useful to those looking for an easy-to-digest way to determine laws for different regions, which is great, it wasn’t the end of the analysis. Surfshark also found intersting data on the future of drone flight.

The information on these infographics is likely to continue to change as legislation adjusts in the years ahead. For now, though, what Surfshark has done here is one of the most easily digestible ways to clarify the rules for drone flight around the world.

Here are all of the new products Apple is still expected to launch this...